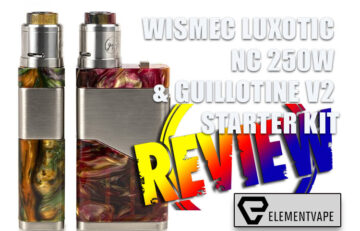 We’ve been doing a lot of “best of” pieces around here, so let me hand out a special “one off” award. The best single, solitary draw off a vape mod I’ve had all year came from the gorgeous, potent WISMEC Luxotic NC mechanical mod.

That isn’t hyperbole, mind you. When you get the right build, the right batteries, and the right e-liquid, the Luxotic NC transcends the usual mechanical box mod trappings and offers some of the most powerful, flavorful hits we’ve had in a while.

Before we dive into the details, we should let you know that the “NC” in the device’s name stands for “Noisy Cricket.” Now, I don’t know about you, but whenever I hear “Noisy Cricket” I immediately think of flimsy, low-rent, barely protected mech mods that were marketed to the wrong type of user.

Well, even though WISMEC isn’t using the full “Noisy Cricket” name, the spirit is there. However, this is hardly the same animal. The dual-20700 Luxotic NC is semi-protected, but decidedly more thought-out than those aluminum throwaways ever were. Oh, this is still an ADVANCED vape device for users well-versed in ohm’s law, battery safety, etc. But there’s a lot more protection against mistakes and/or stupidity.

Now that my speech is over, let’s talk about some looks… because the WISMEC Luxotic NC has them in spades. Right from the outset, you’ll likely have to pick your jaw off the floor after seeing your new Luxotic NC, depending on which of the luxurious, light-catching resin swirl patterns you get.

My reddish-brown resin design is unlike anything else in my collection – and it’s likely to stay that way for some time. The high-polish resin is perfectly countered by nicely machined stainless steel top and bottom plates which are firmly integrated with the resin mid-section, with no play or wiggling to be had.

Because this is a mechanical mod, there isn’t much else to note. The firm, clicky fire key is a solid (if unremarkable) addition, and the old-fashioned variable voltage DIAL, is a little flimsy, but does its job.

Perhaps the most notable adornment is the throwback top-mounted toggle switch, which allows you to choose between maintaining your batteries in either series or parallel mode. I’m no mech enthusiast, but I appreciated the simplicity of the switch, and how well it worked.

[/vc_column_text][/vc_tta_section][/vc_tta_accordion][/vc_column][vc_column width=”1/3″][vc_single_image image=”171877″ img_size=”300×300″ alignment=”center” style=”vc_box_shadow_3d”][/vc_column][/vc_row][vc_row][vc_column][sc_heading bgcolor=”#1e73be” title=”Operating the WISMEC Luxotic NC Mechanical Mod”][vc_column_text]Like I mentioned in the preview, this is about as “bare bones” an experience as vapers can find in 2018, without sacrificing safety or performance. Because of its mechanical design, you don’t need to bother with screens, up/down control schemes, LED lightshows, temperature control resistance locks, or any of the other minutiae vapers have become all-too-familiar with in 2018.

Instead, all you need to enjoy the WISMEC Luxotic NC is wick, wire and a THOROUGH understanding of coil building, resistance levels, battery drain and countless other vaping truths. We said it before and we’ll say it again – this is an advanced vape mod for experienced users. If you’re not 100% clear on the items we’ve discussed thus far, go do a lot of homework before considering adding the Luxotic to your collection. This isn’t a SMOK Alien, and it’s certainly not plug and play.

For that matter, add the terms “series” and “parallel” to that list. If you’re new to these words, the Luxotic NC might not be the right box mod for you. Yes, the Luxotic NC has some safety features built in, but in any device that has the ability to function in more than one way, it’s still KEY for users to understand what they’re doing, and why they’re doing it.

In series mode, the Luxotic NC operates like a standard, bare-bones variable voltage device – that is to say, the absolute most basic control possible. Using the rudimentary plastic dial, users will simply choose their desired output voltage and start vaping. We enjoyed the simplicity, but the dial itself didn’t instill much confidence when placed in my pocket – mostly because it needed to be readjusted every time we wanted to vape it again.

When the switch is flipped, and the 20700 (18650 with included adapter) batteries are placed in the device in parallel, the Luxotic NC becomes a true mechanical mod, drawing power only from the cells, with no regulation options in sight.

And when built right, the Luxotic NC can pump out up to 250 unregulated watts. (Though there won’t be any screens or warnings to let you know.) 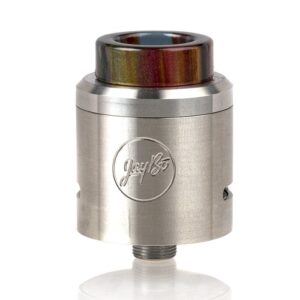 In this day and age, it’s becoming increasingly difficult to discern the differences between rebuildable dripping atomizers. Sure, some are better than others, but when you break it down, there is only so much innovation you can derive from a build deck and top cap design.

In that spirit, the 24mm Guillotine v2 RDA is a simple, no-nonsense, well-designed dual-coil dripper that has one standout feature – the namesake guillotine-style clamps that allow for maximum flexibility in coil placement and positioning.

And, sure enough, even a mid-level coil engineer like myself was able to come up with some fairly creative builds during testing. I even tried a semi-restrictive mouth-to-lung build with some old-school 26-gauge kanthal, but the massive amounts of airflow – even when nearly cut off – made it too difficult to replicate that experience with the Guillotine v2.

But that’s not to say the RDA doesn’t deliver in the flavor department – the stout design and short chimney deliver potent bursts of rich, warm vapor. But “bursts” is exactly how you’ll enjoy it, since the Guillotine v2 is not only a damn thirsty atomizer, but also one with a relatively shallow juice well.

As a result, standard drip enthusiasts will find themselves topping off the Guillotine v2 quite often (thankfully, the wide-bore drip tip makes this easy). Squonk fans will have an easier time, thanks to the included bottom-feed pin, which worked well with all my squonk mods, without any leaking or connection problems.

But, because of the shallow juice well, it’s fairly easy to over-squonk, so use short, measured squeezes, rather than one solitary press, to ensure you don’t flood your build deck.

Overall, the Guillotine v2 isn’t a world-beating RDA, and could use a few more millimeters of depth. But as a throw-in, you can do far worse.[/vc_column_text][/vc_column][/vc_row][vc_row][vc_column][sc_heading bgcolor=”#1e73be” title=”Vaping the WISMEC Luxotic NC “][vc_column_text]Of the two battery modes – series and parallel – I found that the Luxotic NC is best when left to its own devices in parallel mode, drawing power directly from the batteries. Even though the variable voltage adjustments seemed to work as intended, the Luxotic is an old-school mechanical mod at heart, even with the newfangled exterior.

With a pair of married 20700s in place, I found that using the Luxotic as a straight mech mod offered the most consistent, stutter-free performance, even if the device swallowed battery life like Stormy Daniels swallowed ……… recent headlines.

(This is a PG publication, folks – eyes up here, please…)

In series mode, the variable voltage adjustments led to some awkward stutters and pulses, as well as some severe jumps in heat – even when making miniscule changes to the voltage. It eventually smoothed out, but these occasional bursts led to dry hits and uncomfortable warmth more than once.

Stick with parallel mode, and you won’t go wrong. But in either mode, expect to use massive amounts of battery power in each draw, as it seems like the Luxotic NC is looking to provide the most powerful vape possible, given the available battery life.

The included protection suite – short circuit, low voltage, temperature and atomizer short – are all there, but didn’t rear their heads during testing, even when I pushed the Luxotic NC fairly hard. I’m going to keep my eye on this over the next few weeks, and will adjust my review as needed. But something about the LACK of warnings or shutdown concerns me.

One thing that’s always tough for me to gauge how much power is coming from a mechanical mod, but I have to believe the Luxotic NC was living well above 120 watts at a steady basis. I don’t know if we ever came near a 250-watt draw, but the Luxotic was absolutely devouring my e-liquid (and my throat) during some of my lower-resistance testing. These hits were beyond intense – often to the point of discomfort.

But when using more moderate resistance coils – roughly 0.25 ohms – I found the Luxotic NC to offer a smooth, mid-to-high-wattage vape experience that stays smooth for almost the entire duration of the batteries you install.

One final note – battery life was nearly identical using 20700 or 18650 cells (with the included adapter), so chalk another strike against the supposed “big battery/better life” crew.[/vc_column_text][/vc_column][/vc_row][vc_row][vc_column][sc_heading bgcolor=”#1e73be” title=”The Wrap Up”][vc_column_text]Bottom line: We’re cautiouslyrecommending the WISMEC Luxotic NC. While it’s definitely not a beginner device, and the documentation basically ignores newcomers, the vape quality was mostly strong, with a capable RDA right in the box.

Still, we preach safety, and as such, WISMEC needs to go back to the drawing board with these instructions (and release them as a downloadable PDF on their site) sooner rather than later.  Maybe with more explanation about the use of the device, my opinion will change. But for now, the Luxotic NC earns… 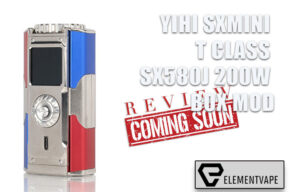 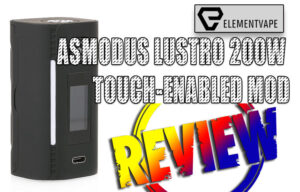