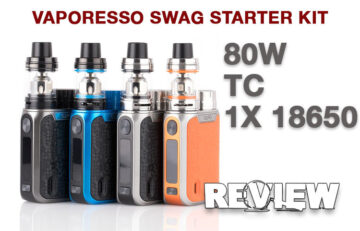 [vc_row][vc_column][vc_column_text]If I didn’t have this gig, I’d definitely want to write product names for Vaporesso. After the curiously monikered “Revenger” mod, it appears Vaporesso has relaxed and learned to enjoy itself, because its latest is all about being chill. Meet the Vaporesso Swag.

But a name is just a name. Can the compact, single-battery Swag bring Vaporesso another winning device? Or is this just another case of image and hype?[/vc_column_text][/vc_column][/vc_row][vc_row][vc_column][vc_single_image image=”168592″ img_size=”750×481″ alignment=”center”][/vc_column][/vc_row][vc_row][vc_column][sc_heading title=”First impressions of the Vaporesso Swag kit”][vc_column_text]You would be forgiven for mistaking the Vaporesso Swag for similar compact mods like the Eleaf Pico, or to a lesser extent, the SMOK Baby Alien. From the top battery cap, to the horizontal 0.91-inch OLED screen, these mods all share similar DNA.

Strangely, my very first interaction with the Swag was a negative one, as the roughly machined battery cap had horrendous threading and even some visible metal shavings, as if my test model was completed just minutes before arriving at my desk. Once on, the cap proved to be snug and solid, but I don’t think I’ve ever deducted points from a mod review BEFORE getting it powered up. Thankfully, the rest of the Vaporesso Swag is much more professionally finished.

If rough threading was the only problem with the Vaporesso Swag battery cap, I wouldn’t have given it much thought. However, the cap’s size and positioning atop the mod limits the types of atomizers users can put to work. Anything larger than 22mm simply won’t fit, which is a shame, because the Swag’s 80-watt power certainly begs for a more substantial atomizer. (However, the Vaporesso NRG is no slouch when it comes to flavor and vapor production)

That said, given the overall height and stealthy design of the Vaporesso Swag, it’s unlikely most of its target audience is waiting to put their 30mm tanks on here. But nonetheless, the limitation is annoying.

It should be recognized that a device named “Swag” had better deliver the visual goods, and Vaporesso outfitted the mod in appropriately slick carbon-fiber stickers. While actual carbon fiber, or similarly attractive finish would have been preferred, this sticker proved to have a nice feel , and seemed pretty durable during testing.[/vc_column_text][vc_gallery interval=”3″ images=”168589,168588,168587,168585,168584″ img_size=”700×700″][/vc_column][/vc_row][vc_row][vc_column][sc_heading title=”Operating the Vaporesso Swag Mod”][vc_column_text]As mentioned, the Swag is a stealthy vape mod, so it wasn’t surprising the control scheme was suitably understated. The clicky, seemingly plastic buttons work well, and respond with minimal pressure, but are adequately recessed, keeping pocket adjustments to a minimum.

The bright OLED screen is nice, and features the requisite amount of information. But it begs the question: With so many innovations being made to modern vape device displays, why are so many companies still resorting to the same look and feel? Is there an overstock of 0.91-inch monochrome displays we don’t know about?

On a deeper, more serious note, why are companies like Vaporesso assuming people who want stealthy, smaller mods also want dense, difficult to navigate menu trees? Experienced vapers will likely figure out the Swag’s menu trees after a few tries. But for beginning vapers, this seems unnecessary, especially in the wake of more intuitive systems hitting devices these days.

There is a dedicated action/menu button on the Swag, but it doesn’t seem to be well-implemented, almost as if it was not considered when the menu system was designed. I found the entire system to be overly convoluted.

The oval fire key has a nice feel, and functions well. But I had more than one instance of misfiring when the Swag was fired after already being tilted toward me. When held vertically, this never once happened, nor did it occur when firing THEN tilting the device. But there appears to be a minor glitch or disconnect when engaging the fire key when the Swag is tilted toward the user.

Navigation aside, the 80-watt Swag mod is well-stocked with features for such a diminutive device. The temperature control system allows for up to 600-degrees Fahrenheit, using the standard nickel, titanium and stainless steel coils, alongside a custom TCR functionality with a pair of memory slots for more intricate builds.

There’s also a bypass mode for vapers who prefer back-to-basics performance, and I found it to be adequate, for sure. On the opposite end of the spectrum, this little mod also packed in custom control curves to help craft preheat and ramp up settings – a very nice feature to pack into the Swag, and one that gives it a distinct edge over the otherwise similar Pico.

The standard wattage mode features a nifty addition for new vapers – a Smart VW mode that recommends a wattage based on an attached atomizer. Though no vaper should be using these devices without a solid education in coils, resistance, ohm’s law, etc., this is a nice way to reduce the barrier to entry for intimidated newcomers.[/vc_column_text][/vc_column][/vc_row][vc_row][vc_column width=”1/2″][sc_heading title=”Testing the NRG SE 22 tank”][vc_column_text]The included 3.5mL NRG tank is a perfectly scaled mini-version of the original NRG, right down to the solid slide and fill top cap, alongside smoothly machined bottom airflow control. On a construction/production level, the NRG SE 22 is a perfectly adequate design, which looks good on most mods from my collection.

However, much like its big brother, I found the included GT coils to be woefully subpar. Both the pre-installed GT2, and the companion ceramic GT Ccell failed to wow me with either flavor or vapor production, and their longevity was questionable at best.

Though each worked as expected for a few days, they only were enjoyable at the top ends of their listed wattage ranges, lessening their life spans from sheer power. After less than two weeks of infrequent use, both coils diminished rapidly.[/vc_column_text][/vc_column][vc_column width=”1/2″][vc_gallery interval=”3″ images=”168572,168573,168577″ img_size=”450×450″][vc_column_text]Sadly, the best feature of the NRG SE 22 is its compatibility with SMOK’s ubiquitous, and far superior Baby Beast coils – not the best testimonial for a new tank offering. With a fresh SMOK coil, the NRG SE 22 offered much richer flavor, and more substantial vapor, though there was some more moisture around the AFC ring than I’m usually comfortable with.

I won’t review the way the NRG SE 22 vaped with the SMOK coils, since I don’t feel this is an adequate measure of a device. Much as it was with the original NRG, enjoy the tank as part of this kit, but don’t bother buying it separately. There are far better options in this price range and category.[/vc_column_text][/vc_column][/vc_row][vc_row][vc_column][sc_heading title=”Vaping the Vaporesso Swag”][vc_column_text]When the Vaporesso Swag behaved itself, it was a solid little vape, especially with the Smart VW mode making its very impressive recommendations. The listed 80 watts was indeed achievable on a solitary 18650 – and for a sustained amount of time.

I enjoyed nearly six hours of moderate vaping at 80 watts using the Swag with a variety of tanks and drippers, while also playing with the menus extensively, tweaking and adjusting for optimal balance between flavor, vapor and warmth.

I found the best experience was wattage mode, by far. Though I’ve made no secret of my preference for straight ahead wattage vaping in the past, it’s never been because of innovation. Just performance.

With the Swag’s built in Smart VW mode, I was able to take any guesswork out of selecting optimal power settings. Though I found the Swag’s proposed levels a LITTLE conservative, it was a breeze to make quick adjustments based off these recommendations, then get to vaping.

Once dialed in, the Swag produced a solid flow of predictable power, except of course for the afore-mentioned lapse in power when firing after tilting the device. I can’t be sure if this is a hardware or firmware concern, but it led to more than one frustrated exclamation yelled from my office.

These misfires are a shame, because when the Swag was firing, it produced steady flavor and vapor, for decent periods of time. In temp control, I enjoyed equally flavorful draws, and a smooth, error-free experience all around.

In Ni200 mode, I DID notice a slightly jumpy coil resistance reading – something that wasn’t evident with either titanium or stainless steel coils. Perhaps it was the nature of the material, or simply the coil I installed, but it was mildly annoying while it lasted. I tried manually entering the Ni200 TCR settings to see if I got different results, but the coil seemed just as jumpy as in the pre-set.[/vc_column_text][/vc_column][/vc_row][vc_row][vc_column width=”1/2″][sc_heading title=”Wrapping Up and Score”][vc_column_text]The Vaporesso Swag made for an interesting review. When it worked, it provided a comfortable, stylish, high-performing vape, in a stealthy, understated manner. When it didn’t, it felt like it might have needed another round of quality control testing. (or was it just my unit? Perhaps us reviewers should be given 2 units to compare to?)

If you can look past the somewhat disappointing tank, the frustratingly oversized battery cap, and the convoluted menu system, the Swag offers a more potent, fleshed-out, thorough offering than the Pico, or other competitors. But those are big concessions to make, regardless of price point or cool name. 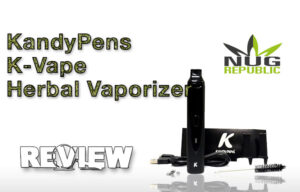 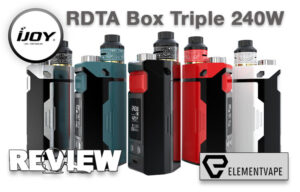