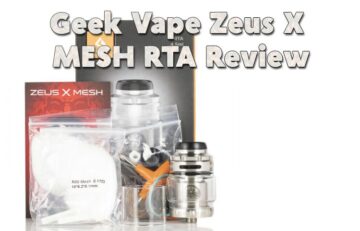 We were absolutely THRILLED when international shipping restrictions were lifted and products started coming in for review. But we were also a little let down when 95% of our shipments contained same-y pod mods and AIOs. So when we saw an honest-to-goodness RTA — from Geek Vape, no less — we nearly jumped over our desks to grab it.

I’m faster than my editor, so I got the chance to review the all new Zeus X Mesh RTA. And, as expected, Geek Vape made another flavorful, foggy atomizer that will please long-time fans of the company (and RTA enthusiasts looking for a new tank). But does that make the Zeus X Mesh a must buy? Welllllll…. You’ll have to read on. 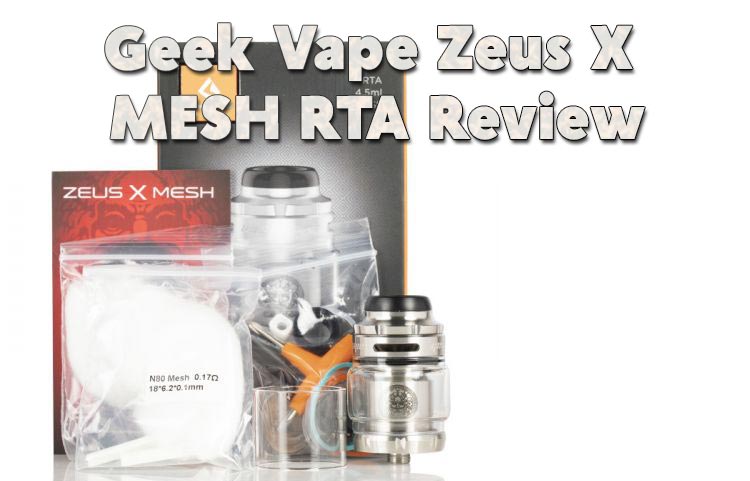 Like it’s nearly identical predecessor, the 25mm Zeus X Mesh is fairly bare bones, with no extra adornments or visual enhancements. But the Zeus X Mesh is still sleek and well-machined, and looks good on virtually every mod I tested it with. GeekVape is known for its slick design choices, and the Zeus X Mesh is another great example. 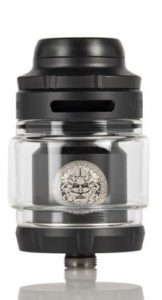 The stout mouthpiece may be a bone of contention for some, since its low profile means users need to put their lips alarmingly close to the hot metal top cap. At moderate wattages, it’s barely a concern. But if you’re cranking the wattage above three digits, you may want to reconsider your mesh builds, since the heat gets to be a little uncomfortable.

And filling wasn’t a breeze, either. The narrow-ish top fill port led to several spills and drips – something I thought we were long past by now. Plus, the actual top cap quickly loosens and tightens into a “locked” position, but it’s not terribly secure, and pops off frequently when trying to refill. It’s not terrible, and shouldn’t deter RTA enthusiasts from investigating the Zeus X Mesh. But it’s worth noting.

Overall, this is a typically awesome and attractive effort from Geek Vape, even if there’s nothing surprising at hand.

When compared to several proven, but still flawed RTAs the Zeus X Mesh is a definite improvement. While this may not be the cloud chaser that its appearance suggests, the overall flavor and enjoyment are higher here. Oh, the Zeus X Mesh can still fog a room, but this is a flavor-first design, make no mistake.

Because it shares an identical design with the standard Zeus RTA, there are still parallels between the Zeus X Mesh and older RTA formats. And with that comes flaws. For starters, the Zeus X Mesh has a decent 4.5mL capacity. But it’s also one of the thirstiest RTAs I’ve ever used, even with the supposedly advanced mesh coils in hand. So have that juice at the ready, since you’ll need it early and often.

That said, the 4.5mL designation is really more like 4mL, since any fill that comes near the top cap begins to gurgle and spit back at the user. While 4mL is still a good capacity for an RTA of this design, there’s no point in trying to “top off” the Zeus X Mesh — it’s just gonna come roaring back to you in unpleasant fashion. 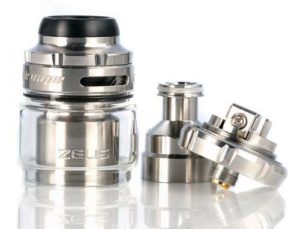 But, I’m happy to report that the top-airflow Zeus X Mesh does live up to its “leak proof” claims. No matter how I tried to get it to fail – overfilling, leaving the airflow open, loosening the base a touch – nothing caused the Zeus X Mesh to leak liquid through its airtight connection points.

The only e-liquid I found escaping came from one incident in which I left the Zeus X Mesh on its side for a few minutes. This isn’t recommended for ANY vape tank or RTA, so it’s hard to criticize Geek Vape for this. Under responsible use, you’re not going to get an ounce of leakage here.

In terms of performance, GeekVape has made a damn fine RTA. Cloud fiends may be a little let down by the flavor-first format, but taste enthusiasts will revel in the deep, rich flavors and warm vapor production.

That said, the Zeus X Mesh is not likely going to be one of the more versatile RTAs in your collection. Why? Because there’s only one way to install flat mesh coil sheets. While this takes away some of the coil gymnastics builders love, those looking for a no-fuss RTA can stop hunting — I had the Zeus X Mesh coiled and wicked in a few minutes, and I was up and running in no time.

One thing to note – be extra mindful of the amount of cotton you use. This is always true when using RTAs, but the Zeus X Mesh is particularly finicky with juice flow. You need to fill each channel completely, but the cotton should be thinned out well, so there’s no throttling under heavy use.

Don’t be deterred by some of the “flaws” we discovered — the GeekVape Zeus X Mesh is a fantastic RTA, and should be on your shortlist for 2020. The nearly leak-proof design, simple build deck and strong flavor performance will appeal to a wide range of vapers. Maybe it’s a no-frills design, and lacks some versatility, but it delivers pure, unadulterated flavor and that’s more than enough for us. 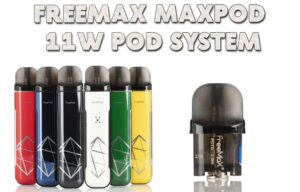 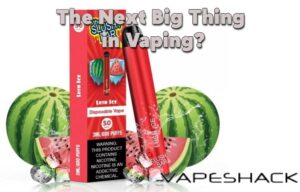 Next post Are Disposable Vapes the Next Big Thing in Vaping?