Intro and Specs for the Wotofo Faris RDTA

These days, getting an RDTA to review is pretty rare. Getting two in one box? Well, that’s the rebuildable unicorn in the vaping world. So, just weeks after testing the Vandy Vape Pyro V2 tank, we’re presented with the MUCH better Wotofo Faris RDTA.

Why is it better? For starters, the Faris can also be used as a serviceable RDA with the removal of the 3mL capacity tank and replacing it with the included base. In addition, the Faris features a nifty side refill design, utilizing a silicone fill port to allow juice to flow in but not back out, reducing the chance for leakiness at fill port. (Spoiler Alert: It works pretty damn well.) 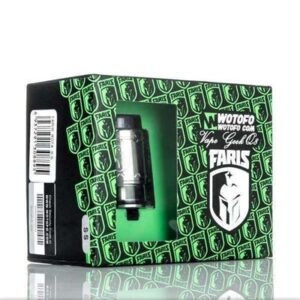 The Wotofo Faris 24mm RDTA is an ingenious 2-in-1 rebuildable atomizer system, ingenious side fill design, and a dual adjustable triple pocket style airflow system that will soon be mounted on many vape mods. The 2-in-1 design includes a RDTA and RDA configuration, featuring a dual purpose postless build deck with 4 side secured terminals positioned on the base of the build deck. This terminal positioning offers the choice between a single or dual coil configuration with the former utilizing wicking port blocks to reduce the size as less cotton is needed for a single coil configuration. [/vc_cta][/vc_column][/vc_row][vc_row][vc_column][vc_tta_accordion style=”outline” shape=”square” color=”black” c_align=”center” active_section=”-1″ no_fill=”true” collapsible_all=”true”][vc_tta_section title=”Faris RDTA Specs:” tab_id=”1560361423240-210fbd46-d6d5″][vc_column_text]

On the surface, the Faris RDTA is standard fare for this type of tank. Matte metal, limited glass section, mid-positioned side airflow, and a 24mm width. Sure, there’s some nice engraving and a shorter drip tip than most devices in this category, but ultimately, there’s only so much designers can do with the format. Like that prom date you might have settled on but learned to love, what’s important is on the inside.

Though I suppose the same could be said for a postless deck. The Faris has a nicely sized build area, but it’s nothing you haven’t seen before. That said, the Philips head clamp screws are larger and more accessible than most, making coil adjustments a breeze by comparison.

Perhaps the most interesting thing about the Faris is the airflow design, which seems like it’s blowing everything right AT the coil, but closer inspection shows some subtle shaping that actually aim things below the coil, lifting it toward the shallow chimney, leading to prime flavor quality by the time it hits your mouth.

One thing worth noting, the clamp screws are large, but I had some surprising difficulty with thinner gauge wire. The included clapton coils are thick and sit perfectly in the terminals, but those who prefer 28-gauge wire might see some occasional slippage until things are set.

Finally, this is a versatile RDTA. Not only can you put the Faris to use as a standard RDTA, but it also has a squonk pin for some bottom-feed action. (I had some trouble with that, which we’ll address later.) But as an RDA, the Faris has some substantial juice wells and awesome flavor. Still, once you put it to use as a tank, it’s not likely you’re going to want to revert.[/vc_column_text][/vc_column][/vc_row][vc_row][vc_column][vc_column_text]

This is going to be quick, because like we mentioned, there’s only so much one can do with the RDTA format. Unlike the Vandy Vape Pyro V2, which suffered for being too “creative” with its airflow design, the Faris keeps things simple and delivers righteous punches of flavor through its “bottom up” direction. Sure, there’s nothing innovative going on here, but who cares when this much dripper-quality flavor is rocketing up the chimney?

Another interesting trait is how efficient the Faris is with juice consumption. Even though the capacity is limited in RDTA mode (and largely irrelevant when squonking) I found myself refilling a LOT less than when using similar RDTAs like the Pyro V2 or VGOD Elite. I’m not saying leave the house without a small bottle of juice, but if you’re a casual-to-moderate vaper, the Faris will surprise you with how frugal it is on e-liquid, especially when considering the flavor clarity.[/vc_column_text][/vc_column][/vc_row][vc_row][vc_column][vc_column_text] 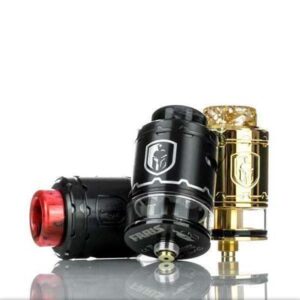 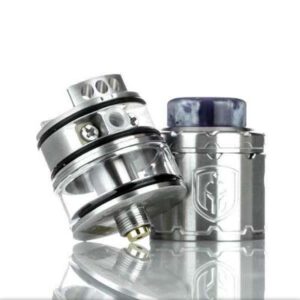 Let’s start with the squonking problem I mentioned above. While the Faris was a FUNCTIONAL bottom-feed RDTA, I noticed that I could never quite get the right “flow” when trying to fill, no matter which squonk mod I was putting into action. Sure, I got the coils plenty wet, but (depending on the device) I either overfilled inadvertently or couldn’t get enough air pressure built up to fill the deck. After years of doing this on RDAs, I found it strange that the pin could be so finicky.

(For the record, it also did this when the Faris was in straight RDA setup, so it’s not a fluke with the RDTA tank arrangement.)

But when used in more traditional means – especially as a tank – the Faris screams pure flavor and surprisingly dense vapor. I put the tank to the test using a range of test coils, and both single- and dual-coil builds, and the Faris handled it all with ease. Even TC builds, which aren’t part of my regular testing regime, worked flawlessly, with no jumpiness or inconsistencies.

Also, the side-fill port lived up to the advertising – in weeks of putting the Faris through the rigors, it never once leaked through the port, even when TRYING to. Not sure what the physics are behind the design, but it works beautifully.

I should mention that when squonking, I occasionally had some leaking from the base, but that was due to heavy overfilling from the inconsistent flow through the BF pin. Once I had the situation under control, there were no further messes to deal with.

Overall, this is about as easy as a complicated, multipurpose tank could possibly be. We still think the Faris is best used as a straight RDTA, but it’s nice to know there’s options for vapers who aren’t satisfied with single-purpose devices.

In terms of recently released RDTAs, the Faris is pretty close in design to the oft-mentioned VandyVape Pyro V2. But this shorter, stouter atomizer is light years removed from that tank, with ridiculous flavor, ample vapor, and some of the best juice consumption we’ve seen from the format. Maybe there are some issues with the squonk performance, but in its most traditional configuration, the Wotofo Faris delivers a divinely versatile, flavorful experience.[/vc_column_text][/vc_column][/vc_row]