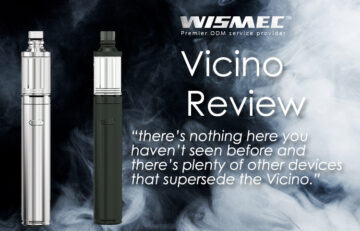 Higher powered, variable wattage devices are my daily weapon of choice because of my ability to fine tune my vapor experience. But having a device I can simply grab, run out the door and not worry about adjustments or extra batteries has been on my radar for quite some time.  Driving a manual car, I’m searching for a mod that’s comfortable in my hand, lightweight and something that won’t distract me or take my eyes off the road. Does the Vicino tubed mod fit that bill?

I’ve used smaller Variable Wattage Mods but haven’t found one that I’m satisfied enough to vape while driving. I have an eGo zipper pouch I hold my device and a unicorn bottle of juice in but it stays at my side, zipped up. It’s been fun having the Wismec Vicino because of my ability to turn the device on and off with a simple one button, five click operation. It’s quite a large device especially when using your own drip tips. It’s made driving and vaping much safer and less worrisome.

WISMEC, makers of the highly popular Reuleaux RX200, DNA200, and the new Reuleaux RX2/3 (review coming soon) Box Mods, presents the Vicino. In essence, the Vicino is a Mechanical Mod, single 18650 battery fixed-voltage device. It measures 22mm in diameter which makes attaching a variety of tanks with the same dimensions easy and pleasing to the eye. It has a spring-loaded Brass 510 pin and a standard 510-connection. I’m been using the Black version but it’s also available in Stainless Steel.

The Vicino Tank has a 3.5ml juice capacity and a standard top fill design. The top cap comes off and exposes just the chimney and glass. There are no fill slots. Just dump your juice between the chimney and glass. Using a unicorn bottle I found is easier than a dropper. Adjustable airflow at the base stops in open and closed positions. The kit does not come with a replaceable glass piece or extra O-rings which is a big red flag for me.

The Vicino works very similar to a Mech Mod. Unscrew the bottom cap and pop your battery positive side in. When the battery is fully charged, you’re going to get a full 4.2V. As the battery drains down, your power is going to decrease along with your cloud production. The device will maintain the power around 3.7V but once it reaches a low of 3.3V, the device’s Low Voltage safety feature kicks it and will prevent it from firing.

A 25-amp high-drain battery is recommended for peak operation and is unfortunately not included with the kit. I used a 20-amp LG HG2 and 30-amp Sony VTC4 and noticed very little changes in power. Having a removable battery is a ‘positive’ for me because I can just carry an extra battery with me and swap it in and out quickly. This could also be a ‘negative’ to some because like the iJust 2’s internal battery, not having to swap batteries out makes more sense from a beginners stand point.

This kit is definitely aimed at the Direct Lung crowd. Getting a respectable MTL pull is going to be difficult with this setup. Operating the Vicino is simple. 5-clicks fires the device on and 5 more to shut it down. Charging can be completed by plugging in the micro USB cord or by removing the battery and charging it externally which is the recommended way.

There’s a small pin hole on the bottom cap for minimal battery venting but is better than nothing. Behind the fire button, there will be a flashing light to indicate the device is booting up, shutting down and to determine your battery life. After firing the device, if the light stays lit, it means your battery is 60~100% and when it’s down below 9%, it will flash frequently.

The Vicino can fire down to 0.15Ω. The device won’t fire if the resistance is any lower thanks to the Low Resistance safety feature. The kit includes two Triple Kanthal 0.2Ω coils with two big juice intake slots. The flavor from the coils is mediocre and the break-in time was a minimum of two full tanks. The flavor does improve but still is only intermediate compared to similar devices. During 4-5 second pulls, you will produce some pretty dense clouds which did surprise me at times. I do experience some erratic spit back and gurgling but mainly when the tank was full, not all the time. Haven’t had any leaking issues and the O-rings seem to be doing their job. It’d be nice to see Wismec include a higher ohm coil, even a 0.5Ω would be acceptable. Only offering a 0.2Ω may be a little too much for a beginner new to vaping.

Because of the lower ohm coil, the tank and drip tip do heat up. If you vape casually you probably will never notice or experience it. I vape constantly and there’s times I have to give it a break to cool down. On the other hand, the Black tinted plastic drip tip that’s included is a nice touch. I prefer to use my own drip tips but that does add length to an already big device. The coils do wick efficiently and have never experienced a dry cotton taste.

Adjusting the airflow when attached to the mod is the biggest disappointment about this kit. Spinning it clockwise isn’t bad. Trying to close the airflow is a monumental task! Every time I’ve tried to restrict my airflow a little, I end up unscrewing the tank from the mod or the tank from the base. Don’t get me wrong, it’s still doable when attached but is aggravating to say the least. A little knurling down on the airflow ring would’ve made the difference here. But to maintain that sleek profile Wismec was after, I guess the sacrifice was to not include this helpful feature.

Refilling the tank is a hassle. Opening the top fill port, I either unscrew the tank from the device or spin the glass piece which feels like I’m loosening it but nothing happens. And the threads are not the greatest. You need to push down on the top cap and make sure it’s level to the tank or you run the risk of cross-threading. So not only do I have to take the tank off to set my airflow, I have to remove it just to fill it up! Don’t get me wrong, you can do both actions

while on the mod, but the hassle it causes isn’t worth it.

The Vicino Kit is definitely aimed for someone that’s upgrading from an eGo type kit and wants to try a sub-ohm tank without the inconvenience of wattage adjustments. For $30, you get the kit excluding a battery.

Buying a battery with the kit, you’re looking around the $40 mark. With someone with more experience, the Wismec Vicino D30 just released (review coming soon) that has a dial for wattage adjustments and even has a

bypass mode! The coil heads are cross-compatible between both too! So if you did pick up the Vicino and are unhappy with it, there’s still hope for the Vicino line!

Do the negatives outweigh the positives?

The aggravating airflow adjustment, squeaky top cap and bottom threads, doesn’t include a battery, extra glass or O-rings and flavor is only average; I don’t think I would use this device much. As the days go by, I’m grabbing this less and less. Just a picky drawback, there’s a slight gap after tightening the atomizer on the mod and would look cleaner if it sat completely flush.

For a fixed-voltage Starter Kit, there’s nothing that sets the Vicino apart that would make me want to run out and buy it. In the world of the Deeming Regulations, there’s so much variety to choose from, I would look elsewhere.

“If you’re just getting into vaping and want to try a Sub-Ohm Tank, this could be a decent device if updating from an eGo type setup. Anyone with experience, from intermediates to advanced users, there’s nothing here you haven’t seen before and there’s plenty of other devices that supersede the Vicino. The potential is there, just executed sub-par compared to its competition. If you’re in need of a quality tube style kit, check out the iJust S from Eleaf!” 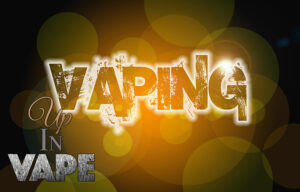 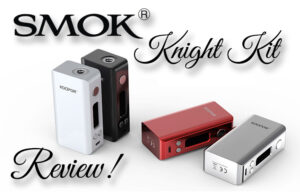