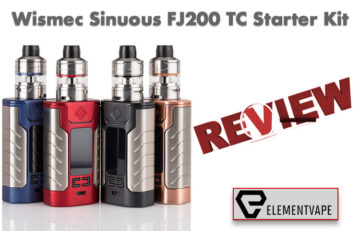 The original Wismec Predator was saddled with the unfortunate tag, “Alien clone” from the get go, which probably affected the device’s impact on the vape market. I didn’t review the Predator, but I used one for a short time, and found it to be a more-than-capable dual-battery mod that probably didn’t deserve the unfair SMOK comparison.

So, when Wismec released the very familiar-looking Sinuous FJ200 internal battery mod, I was intrigued. Did Wismec create something entirely new and original? Or did they fall into the trap of aping themselves to reintroduce an older mod to the marketplace?

Most importantly, did these slight changes improve on the original design, or was it just change for the sake of change?

At the risk of ripping off my own words, let’s dive in…[/vc_column_text][/vc_column][/vc_row][vc_row][vc_column][vc_single_image image=”168158″ img_size=”750×481″][/vc_column][/vc_row][vc_row][vc_column][sc_subheading subtitle=”Initial impressions of the Wismec Sinuous FJ200 Kit”][vc_column_text]I’m not one to harp on packaging, but there’s something about the Sinuous kit box design that appeals to me. Maybe it’s the abstract, ethereal design behind the hero photo. Maybe it’s the subtle Sinuous Designs branding that reinforces the mod as something special. I don’t really know, but I have no doubt this product will stand out on shelves.

(I should note that the USB cable, while standard-looking, is labeled as a QC cable, making me wonder if this is a proprietary accessory. To be safe, be sure to use this cable with your Sinuous FJ200.)

My immediate reaction to the FJ200 was due to the sheer heft of it. No doubt, the 4,600 mAh internal battery has a LOT to do with the weight, as these cells are being tasked with a 200-watt output capability. Now, this isn’t to say that the Sinuous FJ200 is heavy, but the amount of technology packed within the relatively compact device is noticeable.

That said, the Sinuous is a comfortable mod to hold. The flush-mounted fire bar has a wonderful throw, and – unlike the Predator – fires equally well no matter where the pressure is applied. There are no “dead spots” in the mechanism, and I experienced no misfires during my testing.

Visually, the Sinuous has what I would call a “love it or hate it” design. The bold, contrasting colors, jarring cutaways, and overall biomechanical feel makes a commanding statement, to be sure. But it’s not likely going to appeal to everyone, especially older vapers who don’t necessarily want to draw attention to their devices.

However, most vapers will agree with the bright and legible 1.3-inch OLED display. Though it’s a monochrome screen, adding more color wouldn’t have been advised. Wismec’ hexagonal layout manages to get a wealth of information onscreen, without crowding things unnecessarily.

Unfortunately, the FJ200’s up/down control buttons are less impressive. In a questionable design decision, the thin, C-shaped, plasticky buttons are only slightly raised, and situated far too closely together, resulting in a control interface that feels cheap and awkward. I repeatedly had sticky buttons cause incorrect inputs,  forcing me to exit and re-enter menus to make adjustments.

But, to end this section on a positive note, the Sinuous has a centered 510 connection, which is a massive improvement over the offset version on the Predator. Not only is it more aesthetically pleasing, but the connection itself is deeper, with better airflow channels built into the top of the device. All of my tanks sat flush and snug with no issues whatsoever.[/vc_column_text][/vc_column][/vc_row][vc_row][vc_column][vc_video link=”https://www.youtube.com/watch?v=gv8cGe619MU” align=”center”][/vc_column][/vc_row][vc_row][vc_column][sc_subheading subtitle=”Operating the Wismec Sinuous FJ200 Mod “][vc_column_text]Using the Sinuous FJ200 is best described as “familiar.” With an interface centered on fire bar clicks and tree-based menus, there is nothing here experienced vapers haven’t seen before. But the hexagonal display and menu system is easily navigable, and shouldn’t present any problems.

Once in the menus, the FJ200 clearly displays its available modes, including wattage, Ni200, SS316, titanium and three TCR settings. Once in temp control mode, the device allows users to adjust temperature, wattage, resistance lock/unlock, new atomizers, and preheat. It’s a pretty comprehensive suite of options, which is backed up by a full complement of protection features, including a handy weak battery alert.

I also appreciated the “charge error” warning, which indeed DID happen when using a different USB cable than the one provided. I still don’t know how a USB charge cable can be proprietary, but apparently, Wismec has done just that with the FJ200.[/vc_column_text][/vc_column][/vc_row][vc_row][vc_column width=”1/2″][sc_subheading subtitle=”The Wismec Divider Tank”][vc_column_text]When we first received the Sinuous FJ200 Kit, we were a little nonplussed by the included Divider sub-ohm tank, and not much has changed since putting the combination through their paces. While there’s nothing overtly “wrong” with the tank and coils, there is simply too much competition in the mid-sized tank market to consider the Divider a serious contender.

To its credit, the tank comes with the capability to be used in either 2 and 4mL configurations, though I recommend the 4mL as the default setup, since the included WS vertical triple coils are extremely thirsty. In the 2mL configuration, I found myself refilling the tank at a near-RDA pace, even with moderate use.

To be fair, only part of the juice consumption can be attributed to the coils. That’s because the bottom airflow of the Divider tank leaks like a sieve. We’ve become accustomed to a little moisture from time to time, but the amount of liquid that flowed from the AFC was unacceptable in this day and age.

The vape quality itself was adequate, in that both the flavor and vapor production were near- or on-par with similar devices, such as SMOK’s Big Baby tank. Though the kit contained two very similar coils – a 0.2 and 0.25-ohm pair, to be clear – I noticed absolutely no difference in performance.

But that doesn’t mean it was a flawless experience. While I appreciate Wismec using updated battery technology to increase convenience without sacrificing power, I never once felt comfortable taking the mod to those heights. Not because it wasn’t CAPABLE – it certainly hit the mark on power – but rather because of how dramatically battery life and vape quality suffered at these levels.

Let’s take a step back. I first used the FJ200 with the included Divider tank, and the 0.2-ohm coil, which had a broad rating of 40-120 watts. Since I usually hang around the 60-75 watt range, I started there, and was happy with the result.

At a moderate wattage, the Sinuous FJ200 was comfortable, and offered smooth, pulse-free power delivery. The coil seemed to enjoy this power range, as well, since the resulting vape was comfortably warm, without muting flavor.

Pushing the coil a little higher, I went to 90 watts, and started seeing a few cracks in the tank’s armor, but the FJ200 continued to stay cool and comfortable to the touch. The flush fire bar was a highlight, as it was immediately responsive, with nearly no ramp-up, even on brand-new coils.

I swapped tanks to take the FJ200 a little higher, opting for the FreeMax Fireluke tank with RBA section installed. My 0.2-ohm alien coil was more than up to the task of higher wattages, so off we went. At 110 watts, I noticed there some slight excess warmth in the grip of the device, but the vape quality remained high, with steady, smooth power that seemed accurate.

Moving to 150 watts, things began to get uncomfortable. The fire key remained cool, but the rest of the FJ200 was hot to the touch. That said, the power output remained steady, even as we approached the 200-watt capacity. At this point, I was impressed (and intrigued) by the performance of the internal battery.

At 175 watts, things began to suffer just a bit. While the device continued to push out steady power, I felt like the wattage actually jumped HIGHER here. I didn’t detect any pulsing, but there was a noticeable boost in power during longer drags. Plus, the battery level suddenly dropped to 50%, even though it was almost fully charged just minutes earlier.

But, in the name of testing, I soldiered on, and maxed out the FJ200. I didn’t enjoy this aspect of the experience, as the mod became far too hot to hold comfortably, and the power surpassed my coil’s limitations. I can confirm that the FJ200 is certainly able to hit its listed max, but I wouldn’t recommend it to power vapers, as the performance seemed to be really stretching the device’s capabilities.

I scaled things back for temp control testing (after a few minutes of quick recharging and cooling off), and enjoyed how simple TC was to operate with the onboard menus. I used a variety of test coils of each available wire type, and all performed as expected, while the TCR was accurate and easy to adjust.

The included Divider tank doesn’t fare as well, and shouldn’t be a consideration for those solely seeking a new atomizer. However, as a throw-in with the kit, there are worse devices out there, even if other tanks clearly outperform it, top to bottom.

The Wismec Sinuous FJ200 doesn’t offer a flawless experience, but at this price point, its capabilities and easy operation are worth considering. 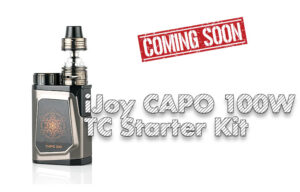 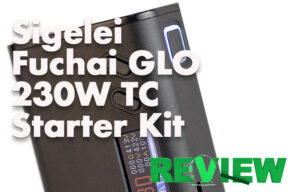