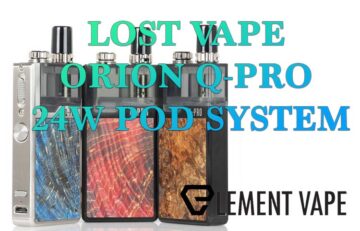 Let’s take a long hard look at the Lost Vape Orion Q-Pro Pod Mod System – After several rounds of Lost Vape Orion/Quest pod systems over the last year, I was hesitant to do it again. It remains one of our favorite pod mod/AIO systems, even after (seemingly) thousands of them crossed our desks this year. But how much more can we write about a perfectly awesome pod system?

As you’ll see, not MUCH has changed since Lost Vape brought us the original DNA-powered Orion last year. But they keep putting out awesome vape mods. And in the case of the all-new Lost Vape Q-Pro pod mod kit, the key is compatibility. 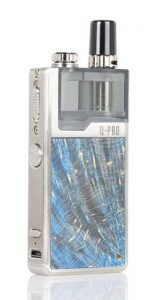 Check out the new Lost Vape Orion Q-PRO Pod System, the latest upgraded reiteration of the Lost Vape Orion lineage, featuring an integrated 950mAh battery, compatibility with all types of Orion Series pods and coils, and can be used for either DTL or MTL vaping, making this a very versatile vaping system.

Compatible with either nicotine salts or eJuice, the Orion Q-Pro Pod System can be outfitted with a series of pods and coils with compatibility extending to past and present Orion variations. Keeping with tradition, the Orion features the adjustable airflow at the drip tip, a threaded top fill system allowing for quick and mess-free refills, and maintains the bottom mode adjustment button allowing the user to cycle through the five preset power levels.

Firing between 8-24W, the Lost Vape Orion Q-PRO can intelligently find the correct output for any installed coil or pod, preventing burns due to excessive power or wattage. Holding up to 2mL of eJuice within the refillable pod, the Orion Q-Pro is the ideal device for a night out, dazzling others with the visually striking frame and exquisitely classy and discreet output.

Aesthetics of the Orion Q-Pro

No one can ever fault Lost Vape for skimping on the look and feel of their devices. No matter your preference — carbon, resin, stabwood or just simple aluminum exteriors — the Orion Quest series has a design to match any preference. (I’ll always lean toward stabwood. It’s kinda my thing…)

As always, I was thrilled with how solid and well-made the Orion Q-Pro is. Just like its older siblings, the Q-Pro is extremely durable and compact, fitting discreetly in the palm of the hand while still offering substantial heft for a device of this size. The stabwood models definitely seem a little heavier than the others, but all of the Q-Pro models feel great in the hand, and in a front pocket. 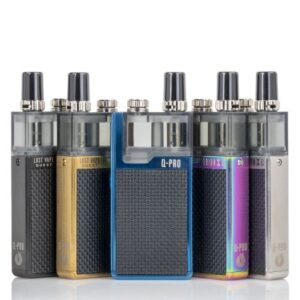 The pod and coil build quality is equally impressive. Gone are the days when these devices had loose connections and button rattle. Instead, my two test models demonstrated none of those things, and fit together as perfectly as ever. The same goes for the pod build quality, which snaps onto the device with a satisfying click, and is about as easy to fill as any pod on the market. No, you won’t be getting large droppers in the grommet slot, but it’s more accepting than most.

But by far, the BEST feature of the Orion Q-Pro is that it accepts ALL pods and coils from this series. Not all of the initial Orion models could work with one another, but some subtle tweaks to the connectors allow fans to take advantage of the entire coil series. This not only shows a dedication to customers who’ve stuck with the product line, but also a dedication to the long-term viability of its products. Well done, Lost Vape. Well done…

But this is me, here, so there’s always going to be something that irks me. Here, the only thing I noticed that might be an annoyance is that the mouthpiece’s adjustable airflow is still stupidly difficult to move until you break it in. Maybe I’m just weak. But maybe they could ease up a little, too.

Because it’s a 24-watt max device the Orion Q-Pro does well with the integrated 950mAh battery. I managed a day and a half of casual MTL vaping on one charge, and the only depreciation in vape quality came at the very end of the battery’s charge, when we were perilously close to the end, anyway. But the adjustable power levels allow you to take a little more control over the experience.

The pods, as always, are a highlight – once you break them in properly, that is. Lost Vape still stuffs these pods with a massive amount of cotton so users will have to let them soak for a good LONG while when first filling. Maybe the new heads broke in a little easier than before, but a good 20 minute-soak made a big difference when firing it up.

Once the coil is saturated, the flavor hits nicely and gets much better after an hour of steady vaping. Like most pod devices, the initial draws are a little thin, but the heads soon become more forgiving, creating thicker and more satisfying vapor that competes with some traditional, higher-wattage vaping devices. 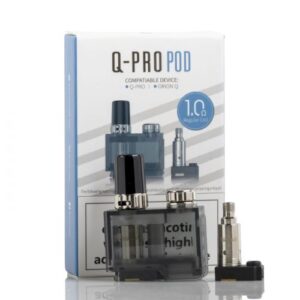 The best thing about the Orion Q-Pro is that it continues the tradition of coil longevity. The heads and cartridges are good for a large number of refills before disposal. Following my previous patterns with other Orion devices, I used nic salt liquids and got nearly two straight weeks of top-tier performance before the coil tired out. My second coil (using more traditional e-liquids) lasted a touch longer, but the performance was just about even across the board.

Lost Vape is pushing this series as a multifaceted device, so I tried mouth-to-lung (MTL), direct lung and restricted lung draws, with the MTL proving to be the best way to use the Orion Q-Pro. In fact, both MTL and restricted lung vapers will find something to like here, depending on the airflow control setting.

The direct lung performance was more muted and less potent across the board, and while I appreciate the ability to use a pod mod for cloudy pursuits, it’s not really the best use of these coils or the battery life. The 950mAh cell is outstanding at lower wattages, but quickly depletes when trying to push it to its 24-watt maximum.

Maybe there’s new colors, new coils, and a broader audience, but the Lost Vape Orion series is one of vaping’s premier lines of products — from the first to the all-new Orion Q-Pro. Not only do these “pod” devices defy the cheap, disposable reputation shared by the competition, but they’re quickly becoming a go-to mod for those who want one device to do it all.

There may not have been any surprises when vaping the Lost Vape Q-Pro, but we really didn’t want any, either. For a powerful, long-lasting vape experience, look no further. 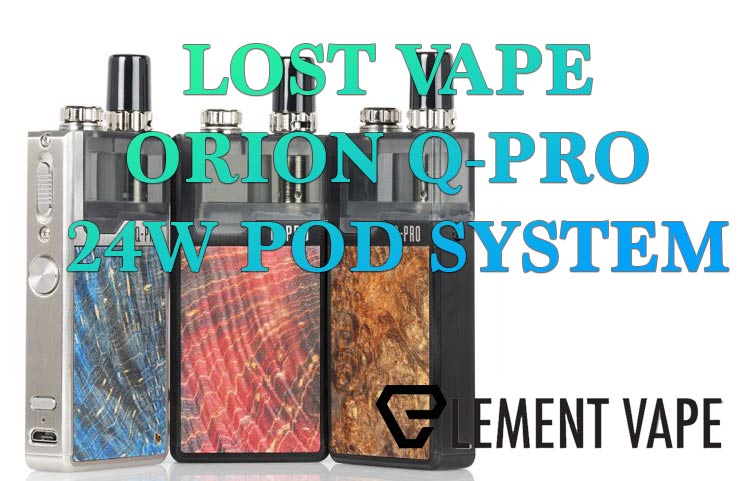 Next post The Art of the Deal Trump and Vape Regs