The Vea One Year Later

When Johnson Creek made the decision to build it’s own e-cigarette from the ground up, when they decided to start from scratch to create an e-Cigarette that would be both beautiful to hold and to look at. When they decided to build the best battery & cartomizer vaping device ever, something that would reflect the same pride and level of quality they put into their famous e-Liquids, they created the VEA, a vaping device that has become a worldwide favorite of Vapers and a homerun the first time at bat. The VEA turned the world of battery/cartomizer vaping on its ears, and continues to do so today. In fact, during the past 13-months no other company has even tried to make a battery/cartomizer vaping solution. How would you do better than the VEA anyway?

The very first time I held one in my hands, the very first time I filled a cartomizer and then filled my lungs with the delicious vapor coming from that same VEA, I felt like I had finally found the right vaping device. That was 13 months ago and the first review for the VEA was published days later, and we published it, Spinfuel eMagazine. The review was written by Doug and me, and every word we wrote those 13 months ago are every bit as true today. The Johnson Creek VEA is the best battery/cartomizer vaping device on the market, and some recent advances to the VEA has only assured that it will remain there for years to come.

Unlike every other vaping device on the market, the Johnson Creek VEA was designed to function as a complete unit. The battery was designed for optimum performance and the VEA cartomizer was designed to work perfectly with the VEA battery. It was, and remains, a successful unification. Nothing feels more natural than vaping with a VEA, and pound for pound, ounce for ounce, the VEA puts out more flavor, more vapor, and a better vaping experience than anything in its weight class. (I would have said “class” but to be honest there is nothing else in the same class as the VEA. It is unique. Like Commander Data, but without a brother name Lore.)

The VEA Battery: The battery is a “protected 650mAh, 2.8v pass-through battery”, with a 3-button-click on/off function, a non-slip grip (deep red) finish, a removable light-up end cap and pressure release ports. It has a universal 7mm x 0.5mm thread.

Cartomizer (Rev 3) – The VEA cartomizer is the perfect blend of temperature, wattage, resistance, airflow and surface area to fully realize the vaping experience with a VEA battery. Rev 3 is a major leap in cartomizer design, and my favorite revision yet.

Each pack of VEA Rev 3 cartomizers is Individually blister-packed in-house at the Johnson Creek facility in Hartland, WI. Surprisingly, the package is nearly twice the size of the Rev 1 or Rev 2 VEA cartomizers, but the cost is the same. $9.95 for a pack of 5. 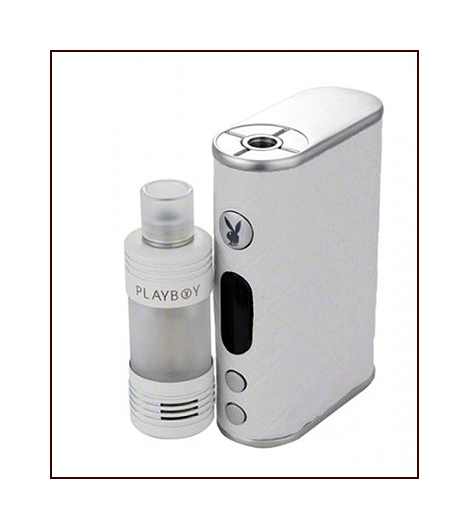 VEA Cartomizer (Rev 2) – The Revision 2 cartomizers are still being made and sold for VEA owners. I’ve heard some owners prefer the Rev 2 because of the lower resistance. Everything else about them is the same, except that are packed in a smaller box and individually wrapped. $9.95 for a pack of 5

Prefilled VEA Cartomizers – $14.95 for a pack of 5, these Rev 2 cartomizers are filled with a selection of the Johnson Creek e-Liquids. They are available in four flavors, Red Oak Mercado, Red Oak Island, Red Oak Tennessee Cured, and Red Oak Tundra. (Red Oak is Johnson Creek’s Non-PG e-Liquid line). I have never vaped a prefilled VEA cartomizer so I can’t comment on the quality. 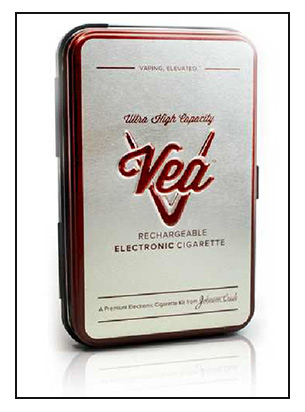 What caught my attention last month was the new, gorgeous packaging for the VEA. The VEA now comes with its custom-made Tin carry case that is such a high-quality case I was truly surprised. I mean, I expected nice, I expected quality, but this was above and beyond. After examining my new VEA Starter Kit my strange way of thinking kicked in and I thought that I should have gotten two new VEA starter kits so I could use one and not feel bad about it because I’ll have hidden away somewhere (or maybe displayed in my office) that I can just admire and know that if for any reason I lost mine or some over zealous Airport Security guy snatched it away from me I would have one ready to step in and fill its shoes. Seriously, I played out several scenarios where I just about had myself convinced to order another one.

That’s how I think. Here’s a perfect example. I was obsessed with the TV show “Lost”. When the special limited edition of the complete series came out, with the board game inside and the map, and all that, on Blu-Ray, I bought two of them. I used one and I keep the other hidden away. I did that for the Limited Edition of Gear of War 3, so I could display the statue of Fenix and display the Cog medal, and of course play the game. The other is still shrink-wrapped. The Johnson Creek VEA meets the same criteria; but money isn’t as disposable as it once was.

Vaping the VEA One Year Later

I still own, and use, my original VEA batteries. I did move up to the Rev 2 cartomizers several months back and was very happy with the little warmer vapor, and slightly more vapor over Rev 1. The VEA is still my favorite vaping device, but its not the one I use the most. And here’s why.

I vape a lot. I mean, a lot. I don’t think I’ve gone more than 45 minutes without vaping for two years now, except when I’m sleeping of course. Because of my job I vape several different flavors and brands or e-Liquid every day of the week, and sometimes on weekends. I cannot bring myself to fill (waste?) a VEA cartomizer with an e-Liquid that I will probably vape 1ML of and then never use again. Like everyone else in the vaping universe I have my favorite flavors and my favorite brands, so at $9.95 for 5 cartomizers I’m not about to use 10 of them in an e-Liquid review. If a particular flavor by a particular brand is good enough to make the “add to my rotation” line, then it will vaped in a VEA cartomizer. I save my VEA cartomizers for my personal vaping, at home, relaxing, reading a good book or watching a good movie.

For just $59.95 you get the following items in a VEA Starter Kit:

The Johnson Creek VEA is a great device for any Vaper, but particularly for Vapers who are looking for something they can enjoy in public without worrying about being stared at, Vapers that want a great vaping experience without worrying about leaking clearomizers, for Vapers that prefer a cartomizer based vape over a clearomizer vape, and Vapers looking for a big upgrade over the cig-a-like experience. In other words, any Vaper can, and would, enjoy a VEA. I recommend it to anyone that has an interest in the best cartomizer/battery vaping device.

There is so much value in this $59.95 Starter Kit that if you decide to buy one you will be surprised when it arrives, no matter what your expectations may be. The VEA screams quality through and through. 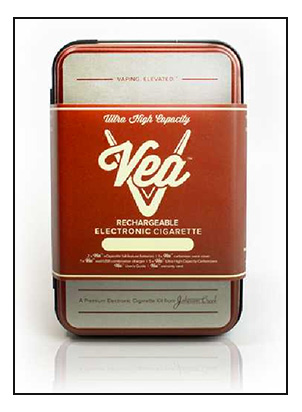 I actually told my wife the other night (I swear this is true), she is also a Vaper, that I wanted to show her something but I was afraid she would take it from me. I have this thing where I have never been able to deny my wife anything. If she told me she wanted my new MacBook Pro I would give it to her, and then dig my old one out of the closest.

I wanted to show off this new VEA and the great Tin it comes in, just the magnificence of it all, but I was afraid that because she knows I already have a VEA and use it quite often, she would think “why does he need another one”, but I REALLY wanted to show it off. She turned to me and said; “I won’t want it, just show me.” And so I did… then she took from me (I got nervous at that point, I didn’t say she could hold it!), and she opened it up, looked at everything, took out the VEA with the cone and cartomizer, took a few drags from it… then put everything back where it came from, closed the Tin, gave it back to me and said “How much did it cost?” When I told her it was $59.95 she reached for her iPad, went to JCSMOKE.COM and ordered one for herself and had it shipped to New Hampshire where we live part time. Ten minutes later she said, “Can I see it again?”… “No…well, maybe tomorrow”. Less than a minute later I couldn’t hold back the guilt any longer and I handed it over. She vaped it for an hour before giving it back.” – Thank god she leaving for NH tonight.

Previous post VAMO 3 Affordable, Reliable, and Just This Side of Ugly?