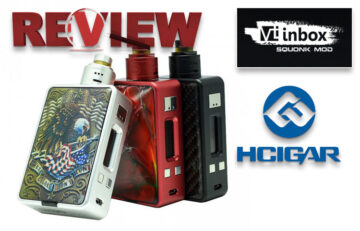 [vc_row][vc_column][vc_column_text]The following is our in-depth review for the HCigar VT Inbox DNA75 Squonk Box. Available at Element Vape for just $89.95.

Can I go on the record and say that I can’t stand the term “squonker?” In an industry that continues a daily fight for legitimacy and public acceptance, how is a term like “squonker” going to advance that cause?

Consider this my first attempt to change the phrasing – things like “bottom-flow atomizer,” “pump-fill RDA” or even “squeeze fill system” all get the job done without sounding like juvenile onomatopoeia.

Let’s get to the item at hand, the HCigar VT Inbox DNA 75. This compact, single-18650 squonk box has a lot of nice things going for it, with only a few hiccups to get in the way. Let’s discuss…[/vc_column_text][vc_single_image image=”167309″ img_size=”750×481″ alignment=”center”][/vc_column][/vc_row][vc_row][vc_column][sc_subheading subtitle=”The VT Inbox: An interesting first impression”][vc_column_text]Vapers around the world will tell you these Evolv DNA devices sell themselves. Apparently, HCigar took that to heart when crafting the packaging for the VT Inbox, because it is about as stark and pedestrian as can be, with only a mild black logo treatment atop a plain white box. This is clearly a device with its own selling power, because the packaging certainly isn’t going to turn heads, that’s for sure.

Opening the box, the HCigar VT Inbox device made an equally strange impression. This series of mods is touted for the replaceable magnetic side doors which allow fans to change the look and feel of their devices to such looks as carbon fiber, wood grain and more. However, my red test device had a candy apple hue throughout all the NON-replaceable sections of the frame, making me wonder how the colors would mesh with some of the other options.

Plus, the red, zinc alloy chassis also features a swirly, ethereal paint splatter design, akin to a Rorschach ink blot, that appears to be unique on each device sold, with no two alike. I won’t lie, my test version looks like I dripped tempera paint on it by accident, and the overall aesthetic is diminished as a result. Your version may hit a better note, but to me, it was more finger painting than modern art.

The remainder of the box features a USB charge/upgrade cable, a spare plastic squonk bottle, and the usual documentation. However, it seemed like something was missing. The Hcigar VT Inbox kit is slated to feature the Maze v2 BF-RDA. However, my test version came with an empty slot in its place.

As reviewers, this isn’t uncommon for pre-production devices. However, I would have loved to put the Maze through its paces, to see how the VT Inbox was intended to operate. Thankfully, I had the pretty awesome VandyVape Pulse 24 BF-RDA on hand, which was more than up to the task.[/vc_column_text][/vc_column][/vc_row][vc_row][vc_column][sc_subheading subtitle=”Breaking down the HCigar VT Inbox”][vc_column_text]Getting back to the device itself, the Hcigar VT Inbox is extremely compact, measuring just 83mm tall and 25mm wide, with a curved rectangular shape that feels pretty good in the hands. Interestingly, both the fixed 510-connection and squonk bottle opening are only slightly offset from center – undoubtedly a functional design, but also in line with the VT Inbox’s oddball design.

That said, the diminutive size of the VT Inbox made the squonk opening easy to access in either hand, making this a good first bottom-fill device for newcomers.

The magnetic side panels are solid, but easy to remove with a fingernail – perhaps too easy. Be careful when pocketing the VT Inbox, for fear of jostling the bottle and battery the wrong way. I also noticed more than a fair share of rattle in this door, so keep an eye on this when you’re on the move.

Opening the side panel reveals a fairly standard 8mL squonk bottle, alongside a snug slot for a single 18650 battery. It’s crowded inside, but the quality of the construction instills confidence that there will be no leaks or unintended mishaps.[/vc_column_text][vc_gallery interval=”3″ images=”167302,167301,167308″ img_size=”large”][/vc_column][/vc_row][vc_row][vc_column][sc_subheading subtitle=”How does the Hcigar VT Inbox operate?”][vc_column_text]The squonk bottle itself is a bit of a hassle to fill, since it fits so snugly in the chamber. But I didn’t experience any spills or leaks – though I rarely filled it beyond 6.5mL. If you absolutely have to top this thing off, be a little extra careful when reinstalling the tube connector.

There’s little I can say about the Evolv DNA 75 chipset that we haven’t covered on these pages before, but suffice it to say the functionality, accuracy and customization through the Escribe platform is second to none. Though I didn’t have to tinker with the settings too much, crafting custom preheat and ramp-up is always a nice option.

The default ramp-up settings should be more than adequate for most users, though. The VT Inbox never once made me wait for satisfying draws. In fact, most of the default power and TC settings were spot on for the device, and I only had to enter Escribe once to get things exactly where I needed them.

On a hardware level, one thing I should note is the VT Inbox fire and control buttons, which all function well, but look to be VERY sloppily installed. My test model had a significant amount of play and rattle right out of the box, and with regular use, this only increased. While I never had any problems or misfires, I can see these buttons becoming problematic with everyday use.

[/vc_column_text][/vc_column][/vc_row][vc_row][vc_column][sc_subheading subtitle=”Vaping the VT Inbox”][vc_column_text]I put together a 0.22-ohm build using some pre-made Kanthal mix twisted coils, and installed them on the Pulse’s post-less deck. I wicked and was thrilled to see that the VT Inbox squonked flawlessly, with the bottom feeding pin perfect juicing and extracting excess juice with every squeeze.

Starting in straight wattage mode at 55 watts, the Hcigar VT Inbox was more than powerful enough to produce a warm, flavorful vape. My build was fairly low, so I cranked the power to 75 watts, and was rewarded with an even more flavorful puff, and vapor that fogged my office in record time.

I don’t normally like pushing a device to its maximum power output, but the DNA chipset handled my request with ease. Even at max wattage, the VT Inbox stayed cool to the touch, and the vape quality never suffered. Draws were consistent, smooth and steady throughout, with no instances of pulsing or power degradation.

Moving to temperature control, I swapped out the Kanthal coils for a simple set of nickel wraps, reading 0.15 ohms. As expected, the VT Inbox detected the change and the default settings were perfect for my build.

I decided to boost the temperature a bit from the default settings, and the resulting vape was instantly warmer, while the flavors were considerably more nuanced and enhanced. I’d definitely place the VT Inbox squonk mod as one of my most effortless, enjoyable TC experiences to date. Though I still prefer straight wattage modes for simplicity, the user-friendly TC controls allowed me to nail that flavor/warmth sweet spot better than wattage adjustment ever could.

One unfortunate catch – the Hcigar VT Inbox has average battery life, at best. The DBA 75 board has proven to be an efficient chipset in the past, but here, the combination of higher wattages and low-ohm builds relegated the VT Inbox to the lower end of the battery life spectrum. Using a handful of fresh 18650s from different makers, I experienced the same steady, but speedy battery drain, even when vaping as low as 45 watts.

The battery life issue isn’t a deal breaker, especially for those who want to experience a regulated squonk mod at such an attractive price, but it’s a notable flaw on a mod that otherwise impresses.[/vc_column_text][/vc_column][/vc_row][vc_row][vc_column width=”1/2″][sc_subheading subtitle=”Wrapping up…”][vc_column_text]The Hcigar VT Inbox has some flaws, for sure – most of which are related to the build quality. The buttons are far too loose for a device of this caliber, and the loose magnetic door is bound to cause some heartache for anyone who puts the VT Inbox in a pocket or purse.

But none of this changes the fact that the VT Inbox is a damn fine squonker for the money. With a proven, powerful DNA 75 chipset, nicely organized bottom-feed setup, and a smooth look and feel, I can see a lot of squonking newcomers making the jump to this style of vaping through the Hcigar VT Inbox. 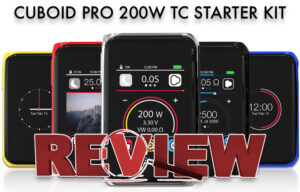 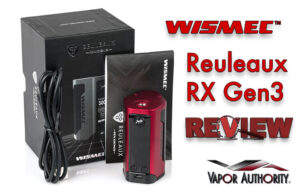 Next post Reuleaux RX Gen3 from WISMEC A Review